Students and staff at Washington State University Vancouver are well-acquainted with fountains emblazoned with “Firstenburg.” The Firstenburg Family Fountain located in the central campus plaza is eye-catching, with rough-hewn slabs of basalt and plenty of seating to relax and enjoy the view.

But the rest of Clark County may not realize that by the time the WSU water feature opened to the public, it was the 16th Firstenburg fountain sprinkled throughout the community — the family also donated 15 drinking fountains, unassuming and ubiquitous enough to blend into a street corner.

“This drinking fountain is one of 15 throughout the community designed and generously gifted by Ed & Mary Firstenburg, 2000,” reads a plaque emblazoned on the side of a fountain at the corner of Main and West 12th streets, the former site of First Independent Bank headquarters.

Rumor has it that the late Ed Firstenburg, who founded First Indy in 1934 and eventually became one of Clark County’s best-known and most generous philanthropists, had a simple motivation for donating the fountains: he was thirsty.

“There’s an old rumor that the Firstenburgs had them installed along the areas they liked to walk,” said Julie Hannon, Vancouver’s Parks and Recreation director. “We are unsure, now, why the specific locations were chosen. We do know that the city pays the water.”

The Parks and Recreation department received the grant to take on the project, and in a 2001 budget document, listed the fountain installation as one of the accomplishments of the department’s 1999 to 2000 fiscal year.

Though only 18 years old, the water fountains have an old-timey appearance. The bodies of the dual-level fountains are cast iron, while the bowls are polished silicon bronze.

“Columbia Cascade designed the fountains to complement the benches and planters, which they designed for Esther Short Park,” said Anne Digenis, senior philanthropic adviser for the Community Foundation for Southwest Washington, the nonprofit that helped facilitate the Firstenburgs’ donation.

Columbia Cascade, a designer of outdoor play equipment and furnishings, did the design work. A Washington-based company cast the metal, then Columbia Cascade did the hand-finishing — a powder-coat, baked-on finish, Digenis said. The logos were hand-painted by Columbia Cascade employees.

Though most are in downtown Vancouver, there’s a few fountains scattered across Clark County in public parks.

If you, like Ed, are feeling thirsty, you can snag a refreshing sip from one of the Firstenburg Fountains located at:

Water fountains around Vancouver were gifts from Ed and Mary Firstenburg

©  2021 The Firstenburg Foundation. All rights reserved.

What Will Become of Firstenburg Philanthropy?Uncategorized 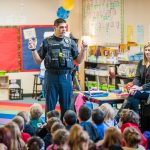